skip to main | skip to sidebar

Few things in chess are more frustrating than out playing an opponent for an entire game only to come away with a draw due to falling victim to a stalemate trick.  One of the nastiest such tricks is the "kamikaze rook."  A player whose other pieces have no legal moves can sometimes force a draw by checking his opponent until he is forced either to capture the last rook resulting in stalemate or allow a draw by repetition.  It is an easy trick to overlook, particularly if you have not seen it before. 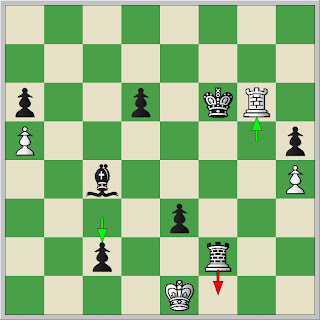 The first thought in such a position is for Black to maneuver the White rook onto a square where Black can capture it with one of the pieces that is confining the White king, thereby avoiding stalemate.  Unfortunately, four out of five of the squares are covered twice so moving one piece won't do the trick.  The only square that is only covered once is d1, the only way for the Black pawn on c2 to capture the White rook is for the Black king to go to c1 forcing White to play Rb1+.  Unfortunately, ...cxb1=Q will still be stalemate.